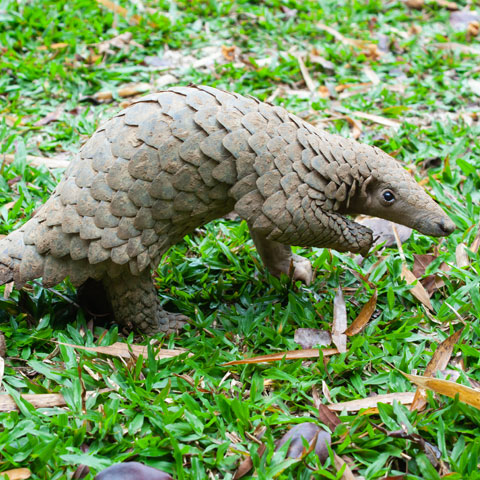 The Wildlife Justice Commission’s Intelligence Development Unit has analysed reported seizure data between 2016-2019 and combined it with the WJC’s own investigative findings to offer a very detailed picture of how extensive the trafficking of pangolin scales has become.

The analysis identifies prolific countries, smuggling routes, shipping methods and the street value of pangolin scales, pointing out new trends, aiming to bridge some of the intelligence gaps in the understanding of the architecture of pangolin trafficking. The study also shows a significant and rapid increase in the volume of scales being trafficked, facilitated by transnational criminal networks that are driving the species to extinction.

Between 2016-2019, an estimated 206.4 tonnes of pangolin scales were confiscated from 52 seizures. The Wildlife Justice Commission believes this is only a fraction of the total being trafficked, as it is likely that a significant proportion of smuggling passes undetected.

Six of the 27 identified countries and territories disproportionately involved in the trafficking of pangolin scales were found to be linked to 94% (193.2 tonnes) of all seized contraband during the period analysed in this report, with Nigeria and Vietnam playing prominent roles in the supply chain. Between 2016 – 2019, they were linked to almost 70% of pangolin scale seizures (143.6 tonnes). During 2018-2019, this prevalence even increased; as 84% of all detected shipments involved one or both countries. The Nigeria – (Singapore) -Vietnam smuggling route has also been identified as a significant transportation route for the smuggling of scales on their own or in combination with ivory.

The coordination and infrastructure required to facilitate the harvesting, processing, storage and transportation of the reported volume of pangolin scales must be huge. In order to effectively dismantle the criminal networks behind it and bring the high-level traffickers to justice, the trafficking of pangolin scales must be tackled from a truly intelligence-led approach, identifying the chronic crime enablers combined with the use of advanced investigative techniques applied to other organised crimes, such as controlled deliveries.

Pangolins do not have a second chance.